Chat with us, powered by LiveChat

How to predict led lifespan?

How to deal with the Warranty with the LED supplier?

How to predict led lifespan?

All things have a process of occurrence, development and extinction, LED is no exception, is a certain life. The early LED was just a flashlight, desk lamp and other gifts, which did not last long and did not have a prominent life span. But now LED has begun to be widely used in outdoor and indoor lighting, especially high-power LED street lamps, which have large power, high heating, long working time and outstanding life problems. The myth that LED life must be 100,000 hours seems to have been shattered. So what’s the problem?

Regardless of power and drive failures, the LED’s lifetime is characterized by its light decay, which means that over time, the brightness gets dimmer and dimmer until finally goes out. It is usually defined as a period of decay of 30%.

So can the life of leds be predicted? This question cannot be answered simply; it needs to be told from the beginning.

Most white leds are made by shining blue leds on yellow phosphors. There are two main reasons for LED light decay. One is the light decay of blue LED itself. The light decay of blue LED is much faster than that of red, yellow and green LED. There is also a phosphor light decay, phosphor at high temperature attenuation is very serious. Different brands of leds have different light decay. Usually LED manufacturers are able to produce a standard set of fading curves. For example, the optical decay curve of American Cree company is shown in figure 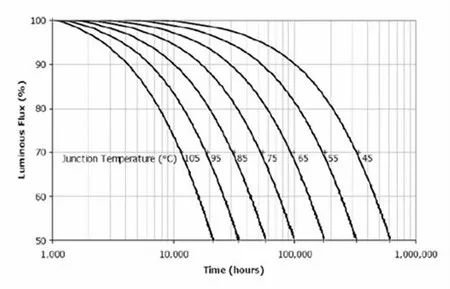 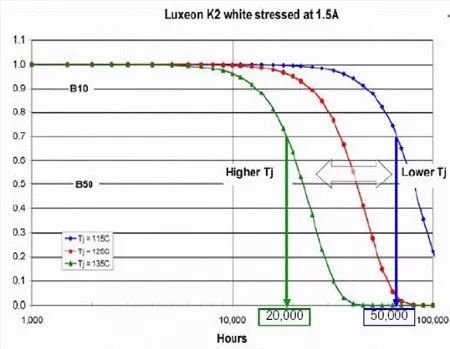 When the junction temperature is raised from 115℃ to 135℃, the service life is reduced from 50,000 hours to 20,000 hours. The decay curves of other companies should be available from the original factory.

2.How to extend the life of LED

Here we are not going to discuss how to design the radiator, but to discuss which radiator is relatively good heat dissipation. In fact, this is a problem of junction temperature measurement. If we can measure the junction temperature achieved by any kind of radiator, we can not only compare the cooling effect of various radiators, but also know the LED life that can be realized after adopting this kind of radiator.

3.How to measure junction temperature

Fortunately, there is an indirect way to measure temperature, and that is to measure voltage. So which voltage is related to the junction temperature? What about this relationship?

We start with the volt-ampere characteristics of leds. 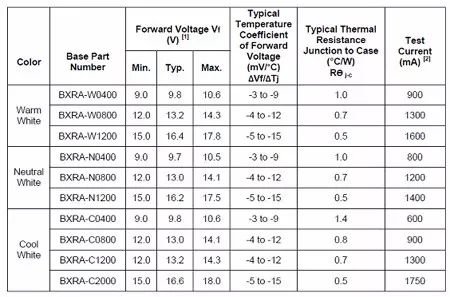 But their figures are too broad to be useful.

Take the example of xlamp7090xr-e from Cree. To explain how to specifically calculate the junction temperature of LED. The LED has been installed in the radiator and the constant current driver is used as the power supply. At the same time to connect to the LED to the two wires out. Before electricity a voltmeter is connected to the output (LED the positive and negative), and then, turning on the power supply before LED is not hot, immediately read the voltmeter reading, which is equivalent to the value of the V1 and at least 1 hour, etc. It has reached thermal equilibrium, test again, the voltage across the LED equivalent of V2. Subtract these two values to get the difference. And then we can get the junction temperature by removing it by 4mV. In fact, most leds are connected in series and in parallel, which does not matter. At this time, the voltage difference is jointly contributed by many series leds. Therefore, the junction temperature can be obtained by dividing this voltage difference by the number of series leds and then dividing by 4mV. For example, the LED is 10 series of 2 and the voltage measured for the first time is 33V, the voltage measured after the second thermal balance is 30V, and the voltage difference is 3V. This number should be divided by the number of leds in series (10) to get 0.3v, and then divided by 4mV to get 75 degrees. Assuming that the ambient temperature before starting is 20 degrees, then the junction temperature should be 95 degrees.

The junction temperature obtained by this method is definitely much more accurate than that calculated by measuring the temperature of radiator with thermocouple.

6.How to predict the life of the lamp

It seems easy to infer the life from junction temperature. Just check the curve in figure 1 below to find out the life corresponding to the junction temperature of 95 degrees, and you can get the LED life of 20,000 hours. However, this method still has certain credibility when applied to indoor LED lamps. If it is applied to outdoor LED lamps, especially high-power LED street lamps, there are still many uncertain factors. The biggest problem is that the heat sink of LED street lamps decreases with time. This is due to the accumulation of dust, bird droppings and its heat dissipation efficiency is reduced. Also because there is a very strong ultraviolet outside, will also reduce the life of LED. Ultraviolet radiation is mainly used to encapsulate epoxy resin aging plays a great role, if using silica gel, can be improved. Ultraviolet radiation also has some bad effects on the aging of phosphors, but it is not very serious.

How to deal with the Warranty with the LED supplier?